Scarborough College is Perfect as a Futuristic Cinematic Backdrop

A look into the development and architecture of the University of Toronto's Scarborough campus, which was recently seen in Amazon's sci-fi television series, The Expanse.
Musings
November 17, 2021 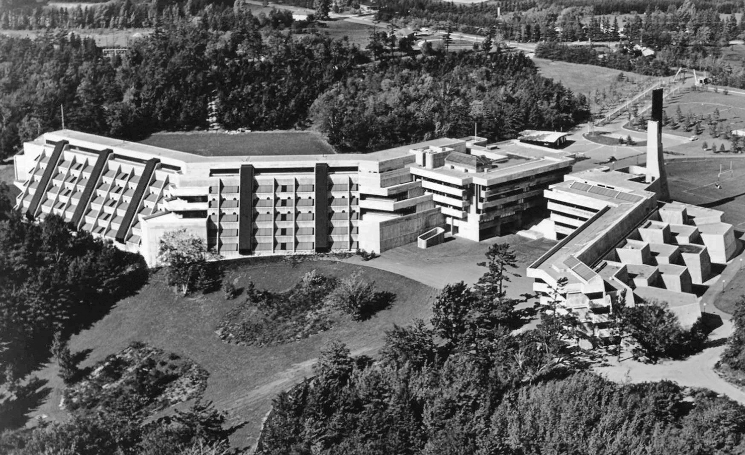 After catching up with the rest of the world this weekend on my sci-fi viewing, I was watching the ninth episode of Amazon Video’s season two of THE EXPANSE and noticed that they were using one of my favorite buildings of all time as the setting as the Mars Consulate on planet Earth. Yes, there she was. Sergeant Bobbie Draper (can’t resist thinking of Don Draper of AMC’s Mad Men as one of her ancestors) running past the entrance to the University of Toronto’s Scarborough College:

This was one of the first real pieces of contemporary architecture that I had the pleasure of visiting and writing about my freshman year of undergraduate architecture school. Correction, it was the second, for we had visited Fallingwater on the way, but much has been written about that of course, and is also one of architecture’s greatest hits as well. If one ever has the chance to visit Fallingwater, they may be overwhelmed by its sheer beauty.

But back to Scarborough: As the story goes, the architect, John Andrews, came to Canada from Australia, attended Harvard Graduate School of Design, settled in Toronto, achieved employment teaching at UoT while working for a prestigious Toronto firm, and started his own firm all by the age of 30. While teaching, and after being selected as a finalist in the Toronto City Hall Competition as a student, the University wanted to expand its college in suburban Toronto at Scarborough. He sort of stumbled onto the project and went on to develop this linear megastructure linked together along the crest of the hill with an internal street as shown from above below. His idea was to have no hierarchy of schools and that all of the classrooms are set up to line the “street” equally. The streets converge on an internal town square shown on the next page (which has been at this point used in several movies and TV series):

What struck my 18-year-old self was how futuristic it was. It was almost brand new at the time and now knowing that it is going to be used as a Martian Consulate in the year 2350 does my heart good. Thinking that maybe Don Draper’s non-canonical offspring somehow chose it as background in an interplanetary incident… what can I say? The man had taste, a feature his descendants may have inherited. Somehow, it is connected. I am sure of it.

What is shown in the aerial photos above is phase 1 as noted. The complete phase is shown in the model on the following page along with John Andrews himself (who went on to design the Harvard Graduate School of Design building and the CN tower in Toronto):

Also, while watching the episode, Bobbie Draper (below, right) started climbing all over the exterior of the megastructure trying to secretly escape and seek political asylum on Earth. She slipped and slid down the exterior slope (slope as shown in the cross section previously):

The structure and organization is intentionally internal and adapts well to the harsh winters in Toronto. A lot of effort went into trying to make this an eco-friendly facility. Mind you John Andrews was only 29 when he was pushing these Whole Earth Catalogue ideas forward back in the 1960’s. As a result, the interior architecture is quite stunning however in person: