A Brief History of Oriental Warehouse

The Oriental Warehouse was designated as historical landmark due to its historical value as the early embarkment point of Oriental immigrants. The brick warehouse is situated near First and Brannan Streets. Its total area of 8,800 square feet on two floors had for many years been used as warehouse and storage space, and was converted into 66 spacious live/work lofts.
Musings
February 1, 2021 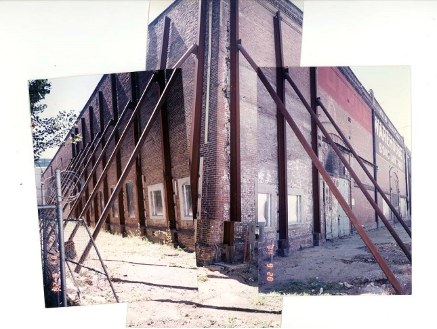 A few years ago, as a senior architect at Fisher Friedman Associates I was tasked by Rodney Friedman with adapting a vacant 2 story brick warehouse on the San Francisco waterfront into 66 live/work units over a new underground parking garage.  This was a project for Henry Lambert of Reliance Development Corporation (now called Lambert Development), New York.

Located at 650 Delancey Street, directly off of Brannan Street, the existing warehouse was built in 1867 by the Pacific Mail Steamship Company for storage of import goods.  At that time the waterfront came directly up to what today is the front set of doors on Delancey Street.  The opposite end, the west end, of the warehouse faced future railroad spurs that carried the imported goods away to be distributed to points throughout northern California.  This 1868 photo shows the western end of the newly constructed warehouse before the railroad spurs were constructed:

Gradually over the next 10 to 20 years (and in spite of the implementation of the racist Chinese Exclusionary Act in 1882) the facility came to be used for the “warehousing” of human beings that had emigrated from Asia on the Pacific Mail Steamship line.  Men were “housed” on the first floor and women on the second floor.  There were no sanitary facilities.  The newly passed Immigration Act of 1891 established a new Immigration Service and a visit in 1892 by the new Commissioner of Immigration described the horrible and appalling conditions, and was the impetus for the construction of a new immigration facility in 1910 on Angel Island.  Only then was action taken to combat the suicides and disease. There has been some work done on this history by local San Francisco historians (possibly able to insert a reference to this after I search my files) and by the historical architectural firm Page and Turnbull.  An illustration from Harpers Weekly 1877 shows immigrants being ushered into Oriental Warehouse:

Below are two maps, the first shows the location of Oriental Warehouse in 1899 to the waterfront.  Notice that in 1899 that the warehouse was no longer at the water’s edge.  The right hand map is from 1912; at that time all immigration facilities had moved to the new buildings on Angel Island.

Before bringing the history description further into the 20th Century, the images illustrate some of the original signage on the north wall of the warehouse.  The first image (the black and white) was taken in 1870 from the hillside (now the beginning of the Bay Bridge) that shows the signage reading “ORIENTAL U.S. BONDED WAREHOUSE”.  This can still be seen today in the bottom photo even after there was a partial collapse of the masonry wall in a fire in 1996 (more on that later).  The middle photo from 1975 shows the part of the signage that was lost in the collapse:

Soon after the turn of the 20th Century and after the 1906 earthquake, from which the Oriental Warehouse suffered little if any damage, the facility was transferred to the Southern Pacific Railroad as a warehouse for their “unclaimed goods”.  A sign to that effect remains in the upper left hand corner of the north wall and can be seen in the 1999 photograph. The Southern Pacific maintained the facility up and until the 1950’s, after which they abandoned it and remained vacant until the renovation in 1997.  Reliance Development purchased the property as a part of the Redevelopment Area in the early 1990’s.  We were hired as the architect soon after that.

Beow is a diagram of the damage done by a fire in the left hand bay in the 1980’s.  North is to the right and Delancey Street is to the bottom.  The middle and right hand bays remained undamaged at that time.

Then the 1989 Loma Prieta earthquake did some significant damage to this same left hand bay as seen in the photo below:

Previously, this area of town became vacant as a part of the new San Francisco waterfront redevelopment area.  Except for the stand alone vacant structure of Oriental Warehouse which can be seen in the background of these 1988 outtakes from the Dirty Harry movie, as seen below:

The building sat this way for a number of years until we were commissioned by Henry Lambert to come up with a scheme to save it.  The following cross section is the scheme we designed in the early ‘90’s.

The parking garage in this initial scheme was not underground, but on grade in the middle bay.  The left hand bay would be a series of 3 story townhouse type units, with the existing timber columns and timber roof trusses left in place. The right hand bay is shown as existing conditions for comparison:

Since our office at the time was adjacent to the site and since we parked our cars there while we worked on the project, coming to work one day in 1996 I see a lot of smoke and see our project going up in flames.  I at the time thought that was it, it was over.  Hopefully though there was insurance.  Well, Reliance Development was insured by their parent company, Reliance Insurance, so they were basically self insured and decided to go ahead with a new design anyway.  Which we did.  The fire completely destroyed the far right bay (most northern) heavy timber construction (columns, floor, and roof trusses) and heavily damaged the exterior wall, the north wall with the original signage.  We started all over.

As a part of beginning again we decided to keep what was remaining of the North wall, as seen in the final photographs, and is the way it is to this day.  Below is the San Francisco Fire Department demolishing the unstable parts of the wall:

Next steps: Lessons Learned—Design on the fly.  In order to convince the owner that it was still a viable project we had to come up with a new scheme fast.  This is when we decided to leave well enough alone and proceed with all of the damaged walls left in place.  The new thinking was to leave the central bay with its heavy timber columns and trusses in place since it was the only one of the 3 bays still intact.  And we would convert from townhouses to live work spaces.  66 of them. 22 in each of the 3 bays. The middle bay would remain heavy timber but since the northern bay was completely destroyed we would put a half sunken concrete parking garage with 2 stories of steel live/work units above.  This would protrude slightly above the existing middle bay roof (see finished photo).  We would match this outer bay with the eastern outer bay as well, therefore doubling up the parking capacity.  Another lesson learned: this is a better scheme than the initial scheme before the fire.  And it opens up the interior courtyards to the open sky by flipping them to the exterior of the footprint at the demolished brick wall.  The existing brick walls would remain where they were still standing (see sketch below):

This sketch reflects the idea we were trying to achieve in the outer 2 bays where we lost the existing heavy timber roof trusses to 2 different fires 15 years apart.

The following photos first show the middle heavy timber bay during construction.  The existing heavy timber trusses were to remain in place, however the contractor decided in conjunction with the construction manager that it would be better to remove and replace the existing columns later.  The right side photos reflect the steel construction above the cast in place concrete platform which is the roof of the parking garage below: