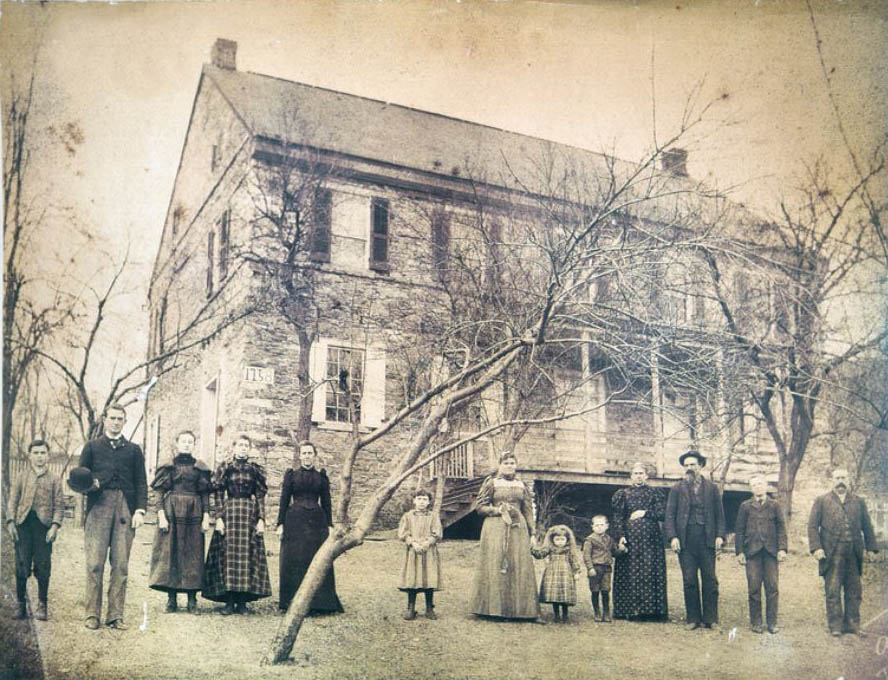 What I am obsessed with this week is an examination of a couple of 18th century homes in the Pennsylvania Dutch country of eastern Pennsylvania that at one time were a part of my family history. Fortunately a great deal of information has been dug up on one of them by various members of my family (my sister Kathy included) as well as Paul Nevin of the Susquehanna Heritage group near York, Pennsylvania.  The official name of the first house is the “Dritt Mansion” although to be sure it is not a mansion, but a simple stone residence constructed in 1738, and since it was the first substantial stone home in the county people started to refer to it as such.

I learned this information as a result of the family history my sister and others have researched over the years.  I have only been aware of it in midlife and surely wish I had known of it earlier so that my father could have known also.  But that did not happen.  So the story goes like this:  My 7th great grandfather, Hans Peter Tritt, came to Philadelphia on the ship “Richard and Alice” from St. Stephan, Switzerland, in 1739. (I wish I had known this back when I attended college in Philadelphia, that certainly would have added to my college experience.)  My grandfather was born in the Alsace Lorraine, France.  All of the Tritt side of my family are his descendants.  After landing in Philadelphia he relocated to the area just outside of York, Pa., near the Susquehanna River,  The map below shows the location of the farmland he settled and the adjacent location of the Dritt Mansion (more on this name below) in relation to it.

Hans’s son Jacob moved into this 1738 stone house in 1783 and subsequently changed the T in Tritt to a D for some unknown reason. Hence the Dritt Mansion name.  (The rest of the family however kept the T.) Jacob Dritt drowned in the ice in the Susquehanna River at Christmas in1817 after serving as a general in the War of 1812.  He was my 6th great uncle, and the house from then on became the family home.  It currently is the home for the local historical society, but I intend to trace its original design and construction up until the beginning of the 2000’s, before a major remodeling took place.

The people in the circa civil war era photograph are my relatives, I presume.  I don’t know since they are unidentified.  However, there is a family cemetery behind the house with the graves of my 18th century cousins suitably marked:

(I do know however my direct linkage back to Jacob’s dad, Hans Peter Tritt, through Jacob’s brother Johan Paul Tritt, my 6th great grandfather, and can trace my line back to them, including the service of my great great grandfather, William M. Tritt, during the Civil War.)

Moving on to the house itself.  Brief history: The site was originally owned by Thomas Cresap who claimed the land as part of Maryland.  The result of which were actual battles with the locals and he was run out of the area in 1736, three years before my grandfather arrived in nearby Philadelphia.  The end result was a new survey, the “Mason Dixon Line”, which determined the site was indeed in Pennsylvania, not Maryland.  After Cresap, John Meyer, a German merchant immigrant, acquired the site and in 1738 built the stone house that exists to this day and is shown in the photographs above.  He was a merchant who used the house as a tavern in conjunction with a ferry service, like those before him, across the adjacent Susquehanna River and past the Tritt Islands (now submerged after the construction of the 1909 dam).  Then, as mentioned above, it was purchased by Jacob Dritt in 1783.

The architecture is a mixture of both German and English domestic ideas.  Parts of the house can be attributed to a Georgian(English) Architectural tradition while other potions consist of German domestic design characteristics.  This is not surprising, since Meyer was a German residing in an English settlement.  Meyer brought his dual identity to the architecture through the use of identity, both public and private.  His public identity was English, his private identity remained German. Overall, the house is mostly Georgian however, an architecture with its roots in 18th century England, which projects to the world his Englishness.

Eighteenth Century Georgian facades commonly exhibited 5 bays with a central entry leading to a central interior hallway.  By contrast, traditional German facades are 4 bays as shown on the following page, and lead directly into the main room. This was a gradual adaptation by traditional German settlers to incorporate and adapt the more formal aspects of the Georgian style.

The Dritt Mansion is a stone 2 story building, with a side-gabled roof, a symmetrical arrangement of windows and doors on the front façade (not the side or rear however), and at least initially, a pent roof over the first floor windows and doors.  (The pent roof was removed sometime in the late 1700’s, probably due to water and ice intrusion that got behind the wood structure on the exposed facades, causing terminal rot.  Around that time a front porch was added.) In addition, the floor plan is symmetrical as well, showing a central hallway/vestibule and 4 basically equal sized rooms. These are all characteristics of 18th Century Pennsylvania Georgian architecture:

What is unusual about the plan is the entry vestibule that divides the public front areas (used as a tavern) and private rear areas where employees and family members worked. The second floor is identical, with the front half for the family and the rear half more public (more on this later) as well as a 20’high attic space for tavern guests to use as sleeping quarters.

It’s all about HEAT however and shows up in the cultural differences between the English and the German architecture, as well as John Meyer’s desire to live in both worlds.  Remarkably Meyer, a German, lived a private English life.  This shows up most vividly in how the home was heated. The English preferred corner fireplaces that use and move fresh air and have side walls that push the heat out into the room while the Germans preferred 5 plate stoves that radiated heat evenly throughout the room.  Looking at the first floor plan the rear English rooms (the private side) have fireplaces while the public front rooms of the tavern have German stoves. The stoves are connected to the rear of the fireplaces in the adjacent room beyond the common wall.  The second floor is exactly the reverse, so that Meyer has English fireplaces in his private quarters while his guests enjoy the warmth of stoves, reinforcing that they are guests in a German Tavern.  Remarkable!

The front half of the house is built over a large vaulted cellar.  This room was about the “cold” and was used for storage of wine and perishables.  It was constructed by digging a huge hole in the ground and forming an earthen barrel vaulted mound within it.  Then stone quarried nearby was laid up and after setting up for a period of time, the earth was removed from under the stone, creating a stone barrel vaulted underground space as shown below (has been somewhat restored as shown):

There are various other details and construction techniques that were involved in the building of the Dritt Mansion in 1738.  A detail worth mentioning is the German handsewn bannister and balustrades at the top of the stairs at the second floor as shown in the left photo below and how they are in contrast to the English round balustrades at the bottom of that same stair at the first floor.

The 2 attic photos at the right show the wooden peg (green arrow) connected roof trusses in the attic space called Liegender Stuhl Strusses, originally found in German speaking areas of Europe.  All of the timber used to fabricate the heavy timber frame and heavy timber roof trusses were hand hewn and hand assembled at the site.

In addition to the heavy timber being site cut and finished, the bricks too that compose the longitudinal walls in the before referenced floor plan were fired near the site. The location of the brick kilns for the interior walls and the stone quarry used to mine the stone for the exterior walls are shown in the photo and the map below in relation to the Dritt House site, less than a mile away:

Also shown on the above South Elevation are the horizontal stone drip caps used to prevent water and ice to get in behind the previous wood framing for the 1738 pent roofs that were subsequently removed.  I guess it did not work.  My opinion is that it surely presents the architecture better this way.  Much simpler appearance.  The diagram above the photo demonstrates how the stone was transported from the adjacent quarry.

The original interior colors have changed over time. The following are some photos of the interior colors as they appeared before there was any interior restoration done, around ten years ago.  (The story of the renovation is for another blog for another time.)

Photo A is taken in the left rear room at the first floor and photo B is taken in the right rear room adjacent to the missing rear summer kitchen. The 3rdphoto shows what the original yellow color was like.  Way too bright by today’s standards and not particularly attractive.

Also as apart of the 3rd diagram is a demonstration of how the pigments can deteriorate and change color over time. The original colors in the diagram are traditional Pennsylvania Dutch color schemes.  But now they appear quite different.

This is an overview of what has become known to my family as an 18th and 19th Century Tritt family home. It is located just outside of York, Pennsylvania, in the middle of Pennsylvania Dutch(Deutsch) country, about 50 miles west of Philadelphia, and now is on the National Registry for Historical Places. I will reiterate that all of this was news to me 25 years ago when my sister made it her mission to figure out where we all came from.  So I dedicate this simple blog to her, Kathy Bricker Tritt, who unfortunately passed away 3 years ago, for without her research we, her family, would not have ever known about this house and its history.

PS: I am including a second house purchased in the early 1800’s by Jacob Dritt’s son, also named Jacob. This 1830 etching below shows the house as indicated by the black arrow at 45 W. Market Street in York, Pennsylvania. The house is still there and is pointed out in the adjacent current aerial photo with the green arrow.

Its story is included as well, courtesy of Tritt.org and Richard Tritt.

‍Article Written by David Tritt, Senior Architect. Photos and images are courtesy of the Tritt family and the Susquehanna National Heritage Area. 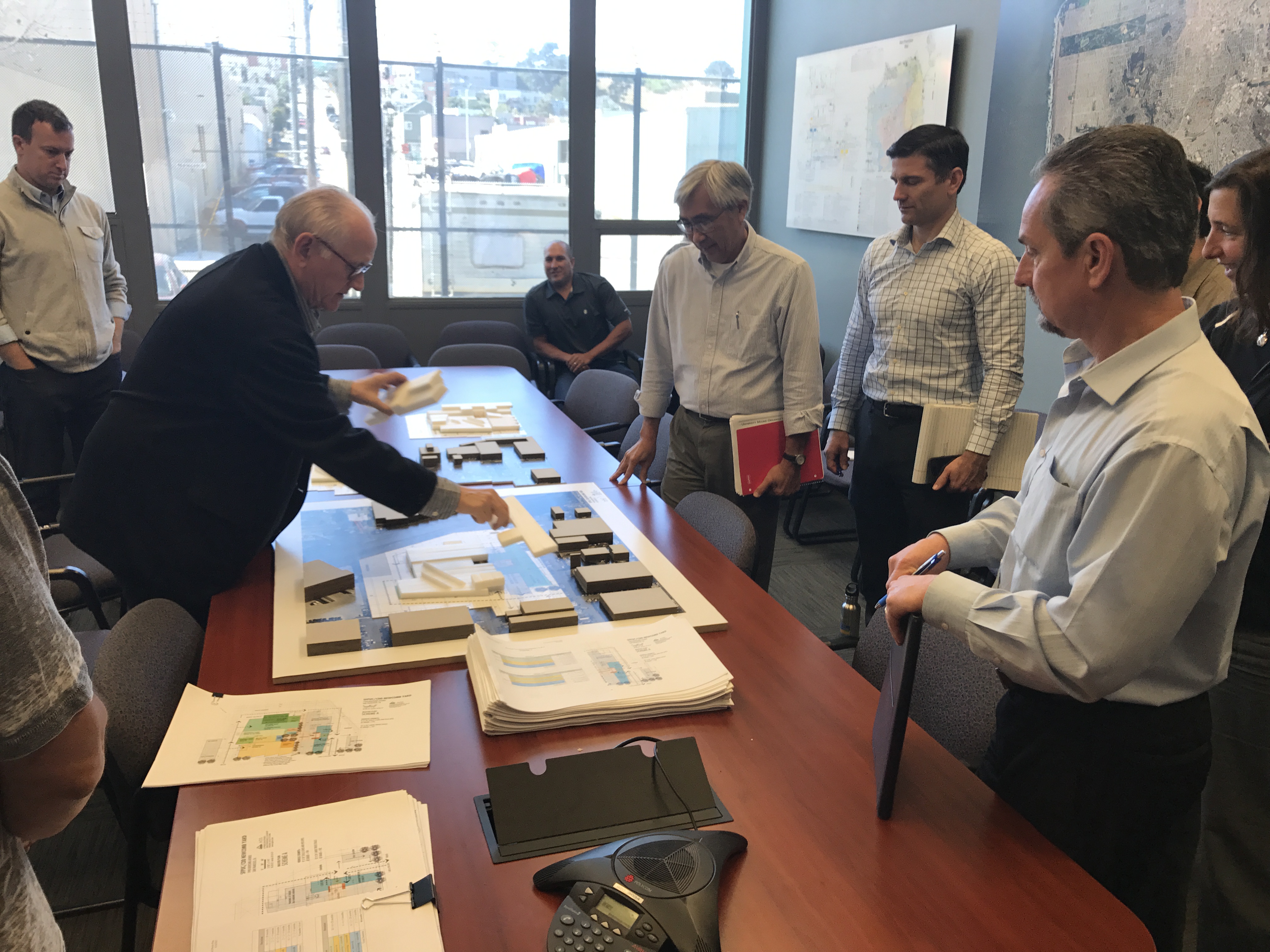