Senior Architect David Tritt has concrete megastructures on his mind, thanks to streaming the Italian TV series, Gomorrah.
Musings
July 12, 2022 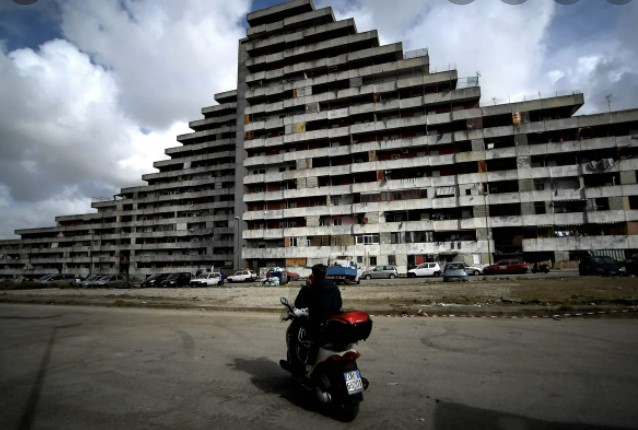 I recently noticed that Boston City Hall has made the top of an ugliest buildings in the world list (on the Business Insider website). This is a building that I wrote about in a previous blog discussing moves to have it torn down. This is not the first ugly list that has featured the structure. My previous blog highlighted how certain pieces of architecture get copied around the world, and how some of these copies are on the chopping block for demolition. Incidentally, I have found another Boston City Hall derived or copied example on the University of San Francisco campus, as pictured below.

Cumbernauld, Scotland for example (above), and a couple of other post WW2 cast in place concrete megastructures are currently being considered for demolition. When I first saw it in person, I thought that the new town of Cumbernauld was one of most dramatic megastructures I had ever seen. It was new at that time. Current views follow below:

A sidenote is that although the Cumbernauld megastructure shown above is planned for demolition, it is not the first Cumbernauld structure that has been demolished. The first would have been the Roman Fort below at the Antonine Wall at what is now Cumbernauld, the Roman Empire’s most northerly frontier:

Later, during the middle ages the village of Cumbernauld was born, it too having been demolished over time (sketch below):

Cumbernauld has a record of self-destruction, but this current demolition of the iconic concrete megastructure seems particularly backward-looking, at least to me it does.

Another post-WW2 megastructure is seen throughout the streaming Italian mobster series Gomorrah (think the Naples version of the Sopranos).  Le Vele di Scampia (Le Vele is translated as “the sails”) which was public housing for some 40,000 (reportedly up to 90,000 at one point) people in seven structures, six of which have been demolished. But the whole tv series uses the remaining building as staging for the crime family about which the series is based.  While the five-season series is pretty good, Le Vele is the star of the show even though it is significantly decrepit. Le Vele was designed by Franz Di Salvo in the early 1970’s and due to what has been termed “terminal corruption” the project was never fully completed but occupied anyway.  Following occupation, crime ran rampant and in the end city government simply gave up. Below is the last remaining Le Vele structure:

When this project, shown white and new in the sun below, was completed it was considered a tremendous housing accomplishment in post WW2 Italy. The complex helped to address the homeless issue that plagued most of Europe in those days:

But the project incorporated Corbu’s idea of exterior corridors located every other floor with stairs either up or down to each unit, allowing “neighborhood activity” and neighborhood stoops to be readily visible and accessible, adding a flavor of community to this unenclosed linear circulation system.  This design element was implemented instead of a long desolate interior hallway:

The idea was that the active areas would be a way of deterring crime by adding to the highly-visible neighborhood experience, but the idea backfired. Bigtime. What happened instead was it provided easy escapes from the police for drug dealers given the geometry of its rat’s warren nature. The police eventually stopped trying or so it has been reported.  Slowly over time it became quite depressing, a contrast from what was to be a vibrant neighborhood experience, especially at night:

There are two other significant pieces of architecture in Naples that show up in the Gomorrah TV series. The first is another concrete megastructure in which the fictional mobsterstar lives, called Piazza Grande. Designed by the Neopolitan architect Aldo Loris Rossi (not to beconfused with the more famous Aldo Rossi) in 1979 and completed in 1989, it was thought to be a city within a city.  Although advertised as “organic,” to me it seems to some more like an alien space vehicle which has landed in the oldest tourist section of Naples. In my opinion, it is not organic and the structure does not fit at all within the context of the site. The design team claimed it to be inspired by the Royal Crescent and the Circus, both in Bath, England. Although it is not that old, cosmetically Piazza Grande has not stood the test of time. Currently a middle class enclave, it is the prominent staged set piece and featured as a main character in Season 5 of Gomorrah:

The other piece of architecture that is a main character in Season 5 is a masterpiece by the late Zaha Hadid, who is shown below in architecture school with Rem Koolhaas, along with a totally cool quote from her when asked to join his firm:

The Napoli-Afragola Railway Station is a stunning, jaw dropping, new transit station in the suburbs of Naples; several scenes are shot there and it blew me away when suddenly images of it appeared on the screen.  It’s really something. This station is a big break from the post WW2 public buildings spoken of above. And being so it is quite a contrast and a conscious look to the future.  Hopefully it won’t be torn down 30 years like these other iconic pieces.