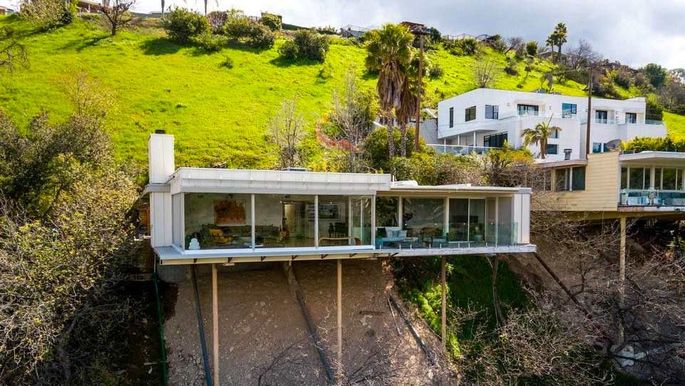 Rudolph Schindler and Richard Neutra both grew up in Vienna.  But, even though the arts scene was strong (think Adolf Loos), they were hearing about and reading about Frank Lloyd Wright in America.  Wright’s stuff was pretty cutting edge to them and to a lot of people at the time.  This was around 1912 or so (think the Robie House).  Schindler and Neutra, despite their age difference, were friends. Schindler, being the elder, first migrated to Chicago in 1914 to try to get a job with Wright.  It took a few years, but eventually in 1918 he was successful in obtaining employment in Wright’s Chicago office and followed him to Los Angeles the next year, where Wright set up an office in a run-down shingle-style home at 8228 Fountain Avenue, just off Sunset Boulevard.  It no longer exists.  At the same time, even though Wright had several commissions in LA, his big one was in Tokyo for the Imperial Hotel project.  Whereupon he took off for 2 years and left Schindler in charge of the LA work. This was later to become a bone of contention when credit for the Hollyhock House and Ennis House was thrown about in various publications and lectures.

Richard Neutra came to LA later, in 1919, after a great deal of correspondence with his friend Rudolph who was ensconced permanently in LA.  He joined Schindler in Wright’s studio on Fountain Avenue.  All of this information is available online of course, but the real point is what the two of them did, once reunited in Los Angeles, was to invent new precedents in residential work that has lasted over 100 years and can be seen in most of southern California residential modernist residential projects to this day.  They set the stage for a California look.  A California modernist architecture that, with all deference to others, such as FLW, has endured and evolved.

On to the Kings Road House

By the early ‘20’s both Schindler and Neutra had grown tired of being in Wright’s employ.  So Schindler began his own practice along with Neutra and in 1923 built his own home at 833 North Kings Road in West Hollywood to function as both an architectural studio and communal living space for 2 families. Rudolph and his wife Pauline, an east coast Smith grad, were joined in 1924 by Neutra and his wife Dione and their young son.  Today, the house is open to the public:

It’s hard to believe that such an idyllic setting is only a couple of blocks south of Sunset Boulevard amidst several mid rise structures.  At the time of its construction, it was the only structure around:

Life at the Kings Road House was particularly unusual at the time.  Rudolph and Pauline were the crazy bohemians while the Neutras were much more conservative. Dione Neutra wrote home to her mother in Austria of the “artsy” friends that dropped in at any time of the night and quaintly noted that “dirty jokes were being told”. Most people believe that a lot more than dirty jokes were being told however, for there believed it to be more of a swingers lifestyle mostly instigated by Schindler.  Pauline never approved of her husband’s affairs, nor did Dione and Richard.  However, according to friends, Pauline was so eccentric in her own right that even in this open living setup she was impossible for people to get along with her.

Neutra never really adjusted to this type of life or the architecture of the home: Besides a communal living room, a communal kitchen, communal dining, there were no real bedrooms, there were instead “sleeping porches” open to the weather.  This life ended in 1930 when the two principals, Rudolph and Richard, parted ways and did not speak to each other until Schindler was on his deathbed in 1953.  But each one, when sharing the architectural studio at the Kings Road House (each had his own practice), reset the Southern California aesthetic in regard to modern residential architecture.

Two noteworthy projects at this time, designed by each one separately, were for the same eccentric client: Dr. Phillip Lovell.  Lovell was a self-described Naturopathic Doctor whose real name was Morris Saperstein. However, his advice column in the Los Angeles Times was real with real health advice for its readers.  Schindler, through Pauline’s acquaintances, started an affair with Lovell’s wife, Leah.  (He also at the same time had an affair with her sister Harriet, who was married to one of Frank Lloyd Wright’s clients.)  Leah was mad about architects, and in 1926 talked her husband into hiring Schindler to design a house in Newport Beach for them:

Leah Lovell, being the dramatic and vivacious person she was, came between Dr. Lovell and Schindler and caused, understandably, a falling out between the two men. At the same time, Neutra, was lobbying - some say behind Schindler’s back to obtain another commission in Los Angeles: the so called “Health House” in the Hollywood Hills.  It was to become his hallmark piece of architecture.

Whereas the Newport Beach house was a regular old house for living, the Health House was something different.  It was to promote healthy living with its exercise pool and outdoor sleeping pods. Neutra got the commission and Schindler kindly stepped away.  This was in 1928.  It was the beginning of the end of their relationship, but Neutra made the best of it and created his masterpiece that set the tone for the rest of his career. The frame was completely of steel, the first in the United States for a single family house, and one of the first uses of sprayed gunite exterior finish:

Many commissions followed along with major recognition:

Additional work by Neutra after 1930:

Schindler’s work after 1930 was not as prolific, but still impressive:

Both men wrote extensively and through their work our modern California architectural heritage was established.  We owe a lot to them.