Exploring the structural feat of SoFi Stadium and the influence of Robert Le Ricolais, the Father of Spatial Structures.
Design
June 27, 2022 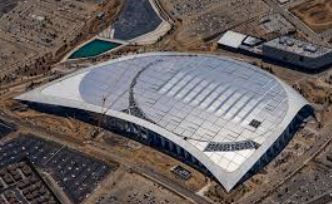 There is aconnection between the German engineering company Pfeifer Structure’s magnificent design for the canopy structure at SoFi Stadium, the site of this year’s Super Bowl, and the ideas of the famous French engineer, Robert Le Ricolais, wh ooriginated the structural concept in the 1930’s. Le Ricolais is often called the “Father of Spatial Structures” based upon his work. His ideas are implemented for thefirst time in North America into the design of the dramatic new canopy roof at the stadium. Mark Williams at HKS Architects deserves a lot of credit for coordinating the overall, complex design.

I knew Robert Le Ricolais.  He was in his 80’s at the time and a design critic at the University of Pennsylvania while I was in architecture school.  A friend and colleague of Louis Kahn, who was the design studio professor and main studio critic, he joined in for commentary sessions on student work. They were a pretty cool set of teachers and I feel very lucky to have been there during their time.  Below on the left is a photo of how ProfessorLe Ricolais appeared at the time (along with Kahn in our design studio), and with his ever-present pipe on the right. I’ll never forget how he looked and his insightful feedback.

Before I get into the connection to SoFi, and I did not know this at the time, Professor Le Ricolais was a WWI veteran of the French Army. He was wounded twice. The first time was in the arm in January 1916 from which he recovered, but the second was a serious bullet wound in July of that year when he was shot through the lungs in the trenches of Curlu at the Battle of the Somme, one of the bloodiest battles in human history, with over 1 million casualties and wounded.  LeRicolais was hospitalized in Nice, where he met his lifelong love Marguerite.

Le Ricolais was trained as an engineer from 1909 to 1913 in both England and France before enlisting on September 5, 1914, when the war broke out.  He was incorporated into the 5th Engineer Regiment as class and then into the 38th Infantry Regiment.  On August 31, 1915 he joined the 30th Battalion of Alpine Chasseurs (as seen by the insignias in the photo below) in the trenches at the front:

Le Ricolais was awarded the Croiz de Guerre with two bronze stars for his valor.

Robert LeRicolais, the engineer, practiced his art up until and through the Second World War. He and Marguerite then took refuge in Nantes, France, in 1943 during the war at least until the Allied bombing raids on the German occupation became too much (the raids killed over 1,200 persons in Nantes).  They then moved to the small town of Orvault out of the way of the war.  The street where they lived in Orvault was named after him in 1978.

In his engineering work, Le Ricolais practiced in more of a Buddhist mindset rather than direct analysis.  He is often quoted that “the art of structure is where to put the holes”.  The economy of matter was always the mystery of nature to him.  Radiolaria, the vocabulary of natural shapes as an ancient phenomenon helped dictate his explorations.  He was interested in the “structural morphology defined by tensional integrity of natural structures”: zero weight, infinite span.

Among other things this idea led to a series of lightweight structures the ideas of which others are reaping today.  And in turn, after he had relocated to the United States to teach, his students explored the concept by building some basic self-supporting tensile/compressive structures in simple model form and shown below and the principles of which would show up later at SoFi Stadium:

The model below is a direct precursor of space structures as it applies to the present day stadium roof canopy. The model is a direct derivation of these above structural models from Le Ricolais’s early work. It is the basis of the canopy roof structure at SoFi Stadium:

The lightweight simplicity of spanning long distances is achieved with the top and bottom cords being in tension (both could be cables like at SoFi), and the verticals being in compression, like theSoFi vertical members.  The only difference at SoFi is that the top cord is a cable. The economy of materials in relation to the span is extremely efficient.

A crosssection of SoFi is almost identical: hard to see but notice the vertical posts and the cable top and bottom cords (clearer photos are below):

Below is a still from Discovery Channel’s NFL Super Stadiums showing a meeting regarding the construction of SoFi Stadium. I recommend viewing this program for a look at the construction process. Notice the cross section on the wall behind:

The construction technique as seen in the documentary is fascinating.  The first move was to string loosely the top cable cords across the stadium, which had the vertical steel posts hanging loosely from it.  Next, the bottom cable cord was also strung loosely across the bottom. Then, workers climbed along the cables out over the playing field (pictured below) and attached the bottoms of the hanging steel posts (compression members) to the pre-located connections on the bottom cord.  The final move was to post tension to the bottom cord pushing up the steel posts, which in turn forced the top cord into its final arched position.  It is fascinating to watch the process as shown in the program.  The design was conceived by Jassen Mihaylovof Pfeiffer Structures:

Below are some photos of the construction of the canopy:

Notice below that this tensile structural system was used in both directions:

We can only speculate that Robert Le Ricolais would have been overwhelmed and delighted atthe beauty and technical feat of this stadium: