Large murals covering the walls of historic transcontinental railroad tunnels in the Sierra offer art and adventure for those willing to make the trek.
Musings
November 17, 2021 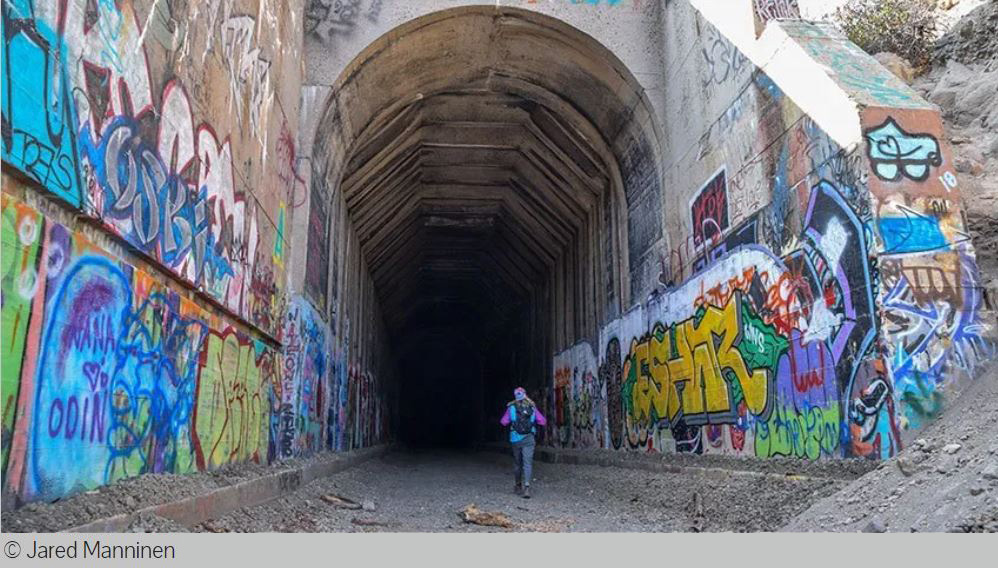 Adventurous artists have turned the walls of 19th century transcontinental railroad tunnels into al fresco art galleries. If you are bold enough to climb up and through the tunnels, Tunnel No. 6 as it was known at the Donner Summit, is particularly worth a look.  Online you will find multiple guides which direct hikers and/or art explorers to the artwork in the tunnels. This is a grid of the graffiti art available to those who wish to explore:

The whole history of how the tunnels got there is fascinating (more on this later).  But they exist today completely open, tracks removed, and inviting to whomever might be interested in partaking.  Photos of Tunnel 6 at Donner Summit can be seen here:

The structures were originally completed in 1868 after 15 months of blasting out the summit's raw granite (see lower right photo above). In subsequent years additional concrete buttresses and snow sheds have been added at the entries of some tunnels.  The eastern entry of Tunnel No. 6 still appears as it originally existed in 1868 as seen below:

Tunnel No. 6 (red line on the map below) is 1,659 feet in length and it is the longest of the 15 tunnels completed at that time in the Sierra by the Central Pacific Railroad for the western leg of the new transcontinental line. These tunnels were used by the railroad as recently as 1993, but a new 10,322 foot long direct tunnel (shown in green on the map) was constructed under the adjacent Mt. Judah, named after the visionary engineer who first proposed the tunnels.

However, the loss of life and racist policies during the construction of the tunnels has been conveniently left out of Judah’s legacy (this will be a subject for another blog at another time).  Since the establishment of the 1882 Foundation, there has been raised awareness of the contribution of Asian immigrant labor for the construction of this leg of the 1868 Transcontinental Railroad.  The railroad which famously changed the American Experience by connecting the east and west.  Furthermore, there is a move, aided by the 1882 Foundation, to bring “Landmark Status” through the National Trust for Historic Preservation to the series of tunnels and the railroad construction.  Also, there is a film produced by the U.S. Forest Service titled “Legacy” that is dedicated to this cause as well. The legacy of the workers, particularly of the Asian workers, used in its construction should be memorialized for their significant contribution to history.

Construction of the tunnels was quite a feat. Starting in 1866 as many as 6,000 to 10,000 men (there were no women workers) worked on the railroad that winter. At one time during this period up to 12,000 workers were blowing holes in the mountain at the summit.  These “work gangs” broke down into 30-40 men each with one foreman directing the work.

The construction process for Tunnel No. 6 was as follows: there were four faces of granite in the mountain that individual gangs of workers blasted through.  They used the newly invented nitroglycerin blasting procedure created in Germany and proceeded in this manner for 15 months.  The four faces of tunnel construction blasting are shown in the following diagram—with a brief explanation to follow:

Back to the graffiti that is emblazoned everywhere on the walls of Tunnel #6, some hate it, and some consider a grand gesture.  My only real gripe is that there is good graffiti art in the tunnels and there is some that I consider to be terrible graffiti art there. From a purist point of view, I guess there would be none. No art. A point in time as it were, to be recognized and dedicated to the history of our country. But history evolves and the “art installation” in the tunnels is part of that evolution and it is valid as well.