Wyatt Earp, famous for the Gunfight at the O.K. Corral, spent time in San Francisco in the 1890s. Highlighted in this blog are some of the places associated with Earp and his wife, Josephine, during that time.
Musings
November 17, 2021 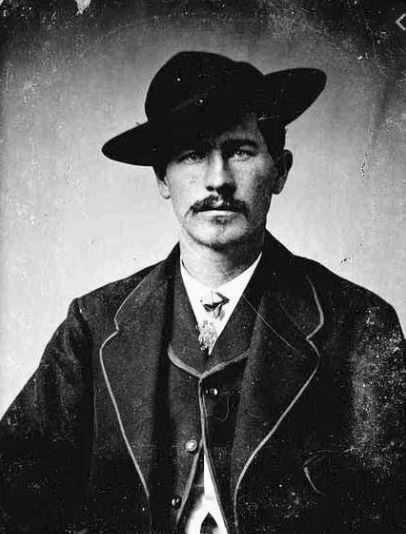 Although I have been aware for some time that Wyatt Earp is buried in the cemetery across the road from the Kohls department store parking lot in Colma, it did not occur to me until I was pulling out of the lot recently to write something about it and see what buildings locally that may have been a part of his life here at the time. A map below shows the location of his and his wife’s tombstone and grave at the Hills of Eternity cemetery (the original  tombstone and some replacements have been stolen over time, showing up at various antique shows and fairs):

During Wyatt’s time living in San Francisco with wife Josephine during the mid 1890’s, they resided at 514A 7th Ave, which is shown below as it has aged over time.  The first two photos are from online sources and taken during the late 20th Century. The remaining view are shots I have taken just recently, for Wyatt lived only a few blocks from where I live now:

During his time in San Francisco, Wyatt Earp basically gambled and drank.  He was able to make a living, while supplementing it with income from writing occasionally for William R. Hearst’s newspapers.  He and Hearst were friends, and it sold papers for Wyatt’s Tombstone, Arizona, days and the gunfight at the OK Corral to be glorified locally through his stories as a lawman, which were then a thing of the past.  He had been doing this since he was a young man, but in the end refereeing would be his undoing in San Francisco.

It is said that Wyatt and Josephine (Josie) met at the Alhambra Theater in Redwood City where Josie was performing, but history shows that they had previously met in Tombstone, where Josie had a romantic relationship with the town Marshall.  But in any case, after Wyatt arrived in northern California he “hung out” as it were at the bar at the Alhambra as pictured below.  The Alhambra still exists in downtown Redwood City, but has been converted to other commercial uses.  Wyatt was known to frequent the Alhambra bar almost daily, where he could also while away the hours gambling:

Back to San Francisco and the world heavyweight fight between Thomas Sharkey and Robert Fitzsimmons at Mechanics Hall, to be refereed by Wyatt on December 2, 1896.  The exact location of Mechanics Hall where the fight occurred is a little confusing to me at this time, for there are two locations where buildings by that name were located: one at the current Union Square (1870 photo next page) and the second at the current location of the Bill Graham Civic Auditorium. Included below are photos of each:

In any case, the following are the participants in the fight:

After that, Earp was no longer welcome in San Francisco. So in 1899 he decided, along with Josie, to explore opportunities in the Nome, Alaska gold rush. So they moved from their home on 7th Avenue, to move North, which at that time was no mean feat.  It was 2,000 miles away and the only way to get there was by a long and arduous boat trip of crowded men.  The trip was pretty uncomfortable for Josie, but as a post script to this blog it turned out to bea fortuitous move.  Together they set upa gambling casino, bar, and house of prostitution called The Dexter, photo below.

After a short time they made over $2 million in today’s money “mining the miners” and returned to settle on mining claims for themselves in California and Nevada where they once again, in addition to mining, set up taverns.

In addition, below is a photo of them together at their mining camp in Vidal, California:

Ultimately, they settled in Venice, CA, to live out their lives.  Wyatt died in 1929.  Josie lived until 1944, and is buried alongside Wyatt in Colma.